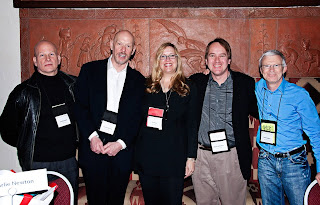 Because of sketchy internet at my hotel, I wasn't able to update regularly from Left Coast Crime. But I had a great time, met some new friends, writers and fans alike, and let everyone know there's a new writer in town! I had a panel called Many Faces of Violence and I didn't hold back. Neither did the other writers, David Corbett, Charlie Newton, Mark Coggins, J.T. Ellison and Martin Cruz Smith. And based on many comments afterwards, to me and to the others, it was considered one of the best panels of the Con. I know I made some new fans and sold some books. I've included a photo of the panelist, save for Martin Cruz Smith who was signing books.

Tomorrow, I'm off to Phoenix for an event at the Poisoned Pen Bookstore. If you live in the area, come on down.

Also, it's the official release date for Fall From Grace. It's also my agent's birthday so it's gonna to be a good day.
Posted by Wayne Arthurson at 5:44 PM 3 comments:

Posted by Wayne Arthurson at 9:21 AM No comments:

I'm back. It's been a tough week with the cold/flu in the house again and lots of work to be done before I head out to Santa Fe for the Left Coast Crime and then onto Phoenix and Houston for a couple of readings. I'll be posting more about the trip when I'm on the road.
A couple more reviews came in, both really really nice. Here's a link to one:
http://drowningmachine.blogspot.com/2011/03/review-fall-from-grace-by-wayne.html
Also, Quill and Quire, Canada's magazine for the publishing trade industry gave a glowing review. I can't post a link because it's a pay subscription site but I can give the opening and closing paragraphs. They are pretty awesome

"It's thrilling, for a reader, to discover a new amateur detective

devoid of stock cliches, unique and refreshingly human. To the august

"It looks like Arthurson has future Desroches novels planned.

They've just been added to my 'must read' list."

Just over a week before the book is released and I'm getting pretty excited.
Posted by Wayne Arthurson at 10:19 PM 1 comment:

Today the National Post published this article in which I pick the book I'm most looking forward to this Spring. At the same time, it calls my book one of the most anticipated books of the season. Win win.
http://arts.nationalpost.com/2011/03/11/spring-picks-from-david-foster-wallace-to-zsuzsi-gartner/#more-26900
It's late so I don't have time to tell you how this story came about, but later I will. It's a basic lesson in media relations.
Posted by Wayne Arthurson at 10:28 PM No comments:

Hey followers of BigTimeWriter.
There's been a lot of talk about e-books these days, and how writers should forget about traditional publishing and go out on their own. There have been many examples of people who have made a lot of money this way. I like e-books, I think it's a neat way to go, if you have a good book to sell. It's also a good way for writers who have a name to re-release their out of print books. It's something, I'm thinking about. I also like paper books. I like the feel, I also read a lot in the bathtub and there is no way I'm going to bring a reader in there. I don't really have a reader anyway; I get most of my books from the library.
My problem is that there are a lot of "experts" out there touting the pros and cons of both, saying it's all going to go one way or another. I'm a pretty reasonable guy so I'm wondering why does it have to be black and white? Why can't both co-exist? I don't see traditional publishers going away, changing perhaps but not disappearing. I also see more people releasing e-books on their own. And that will be good too.
I also like that fact that because my next two books will released by a major publisher, I can get reviewed and interviewed by major publications and major personalities like Shelagh Rogers more readily than if my book was self-published. I'm eligible for awards. Also, literary festivals will consider inviting me to their events and those things are amazing. These aren't Cons like Left Coast Crime or Malice Domestic. The difference between literary festivals and cons is that you are invited to a festival, most of your transportation is paid for, you get accommodation at a high end hotel. In Canada, they give you a per diem plus a fee every time you read or talk about your book in front of an audience. And you get to spend a lot of time with a lot of great writers talking about books and writing. I know these things are just perks when compared to selling 10,000 or 25,000 e-books as a self-publisher but I really like them. I know there's a possibility that I can have those perks and still sell that many copies but I'm not always in it for the money. I like the little things that you can't really price out.
Posted by Wayne Arthurson at 8:23 AM No comments:

I'm back! It's been awhile since I've blogged and the reason why is that many things have happened. Here is one of them:
http://www.edmontonjournal.com/news/Fenn+bankruptcy+stings+Edmonton+author/4230880/story.html
I've also got some great reviews of my book so far, go here to see one:
http://www.amazon.com/Fall-Grace-Wayne-Arthurson/dp/product-description/0765324172/ref=dp_proddesc_0?ie=UTF8&n=283155&s=books
Booklist also gave me a great review and here's an excerpt:

Leo Desroches is a reporterfor a Canadian newspaper. He’s also a gambling addict, a thief, and a one-time derelict trying to reform.Nothing raffish about him. One senses that Desroches, like the prose used to create him, exudes wicked energy kept under stern control. He interviews the police about a murdered prostitute and then begins his own inquiries, which are recounted in a series of highly charged, stunningly written set pieces, all the more effective for their understated, almost droning, manner. There’ll be no more spoilers here. Just think of Spillane’s Mike Hammer describing himself: “I was the evil that opposed other evil.” This is a genrebender, its twists all the more startling for being unexpected.

And here's a piece about me.
http://www.thebigthrill.org/2011/02/fall-from-grace-by-wayne-arthurson/
I was also interviewed by Shelagh Rogers for The Next Chapter, the national book program for CBC Radio. That's a big deal because Shelagh is very well known in Canada. The interview will run on March 21 at 1 pm on CBC Radio 1.
But now that the Canadian distributor of my bigtimenovel is out of business, it's been up to me to book a Western Canadian tour and contact all the media in the cities I'm going to. It ain't been easy but so you know, here's my Canadian tour (with one stop in LA):

If you live in one of those cities, come on down.

Also, I'm heading out in a couple weeks for a US tour. I'll first be at the Left Coast Crime Convention in Santa Fe New Mexico from March 24-28. And then I'll be in Scottsdale, Arizona at the Poisoned Pen Bookstore in March 29 (the actual release date of my bigtimenovel), and then I'll be in Houston, Texas at Murder By the Book on March 30. Since the book is coming out real soon, I'll be updating my blog on a more regular basis from now on. My agent says I got to keep my fans happy. They'll want to know things about me and stuff like that.

So I'll fill you in a bit. If you read this, you'll see that I'm not that open talking about myself on this blog. It's nothing really personal, I just don't like to share too much information about myself with many strangers. I know many writers like to writer about themselves on their blogs but I'm not that kind of guy. You might get a photo of me here and there but you won't get any really personal stuff about me and my family. Like I said, it's nothing personal, just the way I am. And I'll be honest; I'm not a big fan of blogs, I don't read many and there a lot of things I have to do like write and work instead of blogging. If you want to get more up to date info about, go to Facebook, offer to be my friend (tell me who you are first and why we should be friends) and chances are, I'll be your FB friend.

Anyway, I've got to go, maybe I'll read before bed. I got a new book from the library called Once A Spy by Keith Thomson. It's pretty solid, reminds me a bit of the movie Red but the retired spy has Alzhiemer's. Good night.

Posted by Wayne Arthurson at 9:04 PM No comments:

Wayne Arthurson
Edmonton, Alberta, Canada
Wayne Arthurson is huge TAR (The Amazing Race) fan, having watched all the US, Asian and Australian versions of TAR. He's also a bestselling crime novelist and freelance writer. Plus, he plays drums in a band called Beerbelly.